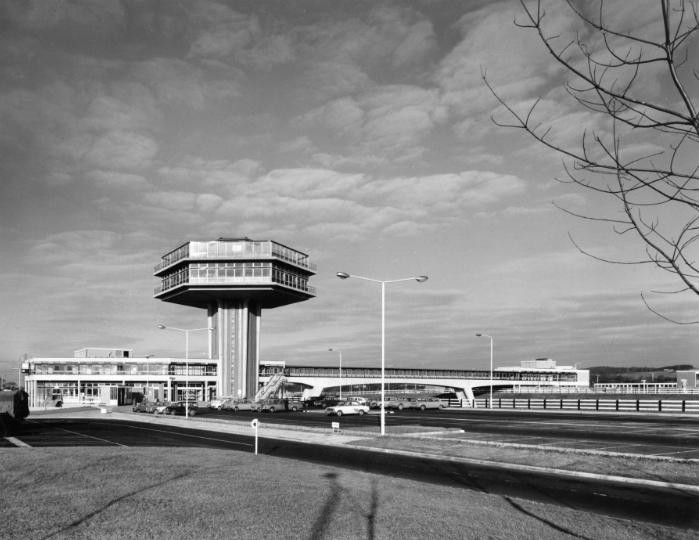 Today we take the motorway for granted. Very much a means to an end, a functional tool to use to get on with our daily commutes. We tend not to give them a second thought. But, back in the heady days of the 1960’s motorways were still seen as a forward thinking glimpse of the future. Like the German autobahn of the 1930’s and the roads of ancient Rome they stamped their mark on the countryside they were built upon. Crowds of people attended their openings to gaze in awe at  the wonders of modern construction. 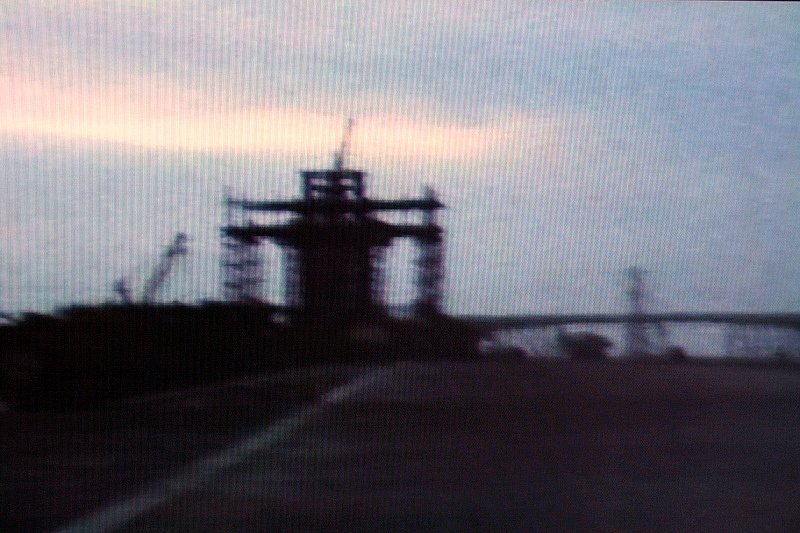 With the dawn of motorways in the U.K. another sight, now familiar and viewed with varying levels of love & hate, began to appear, the motorway service station. As the years went on these service areas became fairly banal and functional in appearance but some of the earlier services showed an optimistic spirit and few more so than Forton Services. 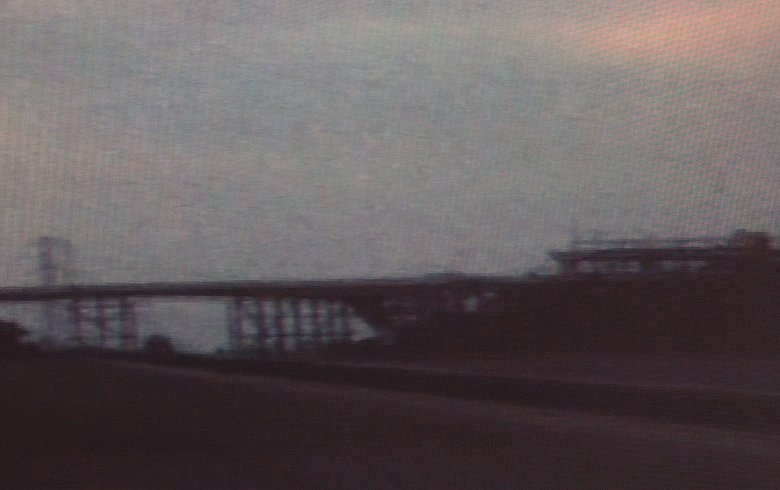 Designed and built in 1964, the services were opened in January 1965, on the same day as the stretch of motorway between what is now junctions 32 and 33

Forton is a small village situated 7 miles south of Lancaster and virtually half way between London and Edinburgh. This gave builder Rank the idea of elevating Forton into a glorious half way house for those using the new M6 motorway. There was also the advantage of having large nearby catchment areas of Lancaster (7miles), Preston (7miles) & Blackpool (24 miles) 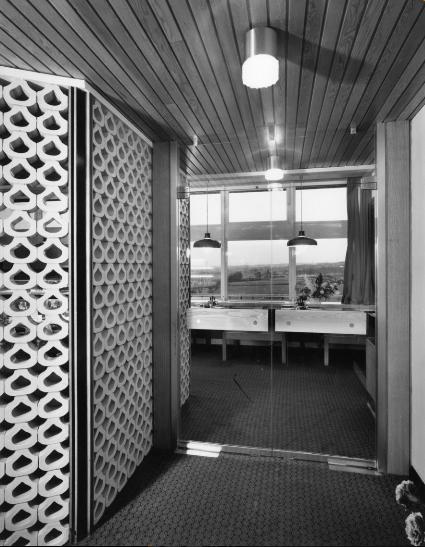 Such was the novelty of an American styled refreshment outlet that not only could these areas attract the motorway travellers but also locals wanting to experience something different in a place that would stay open late. Some of its earlier patrons were said to have included the Beatles who regularly made the 70 mile journey from Liverpool to experience this high raised cosmopolitan world of speed, travellers and cappuccinos. 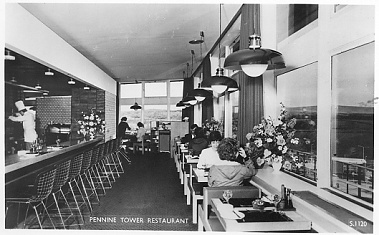 The siting of Forton services enabled the visitor to enjoy spectacular views over the countryside of the north Lancashire plain and the Bowland Fells. It was built with a 20 metre high tower, cantilevered at the top to provide two storeys of accommodation including an open ‘sun terrace’ and a 120-seat restaurant with waiter service. It was given the name 'The Pennine Tower'. The tables were cantilevered off the outer wall, enabling unparalleled views of the motorway and surrounding countryside. Larger or more casual parties could eat at the American style counter seated on wire-backed chairs. This was of a time when people would have time to sit and enjoy a meal with waiter service with non of the throw away fast food world we live in today. 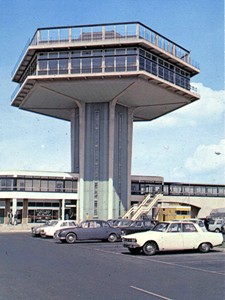 Forton was designed by the London based architects T.P. Bennett & Sons. Their practice had evolved during the 1920’s creating elegant and classically detailed apartment blocks in the west end of London before establishing itself as a formidable designer of commercial space including some notable cinemas. The practice founder, Sir Thomas Bennett, never lost touch with his art and crafts roots. Even as late as the mid 1960’s, when Forton was being designed, he would organise life-drawing sessions during lunchtimes for any interested staff.

The architect in charge of the Forton project was Bill Galloway. The job architect, Ray Anderson remembers Rank left the development of the brief and the detail of the design up to the architect. 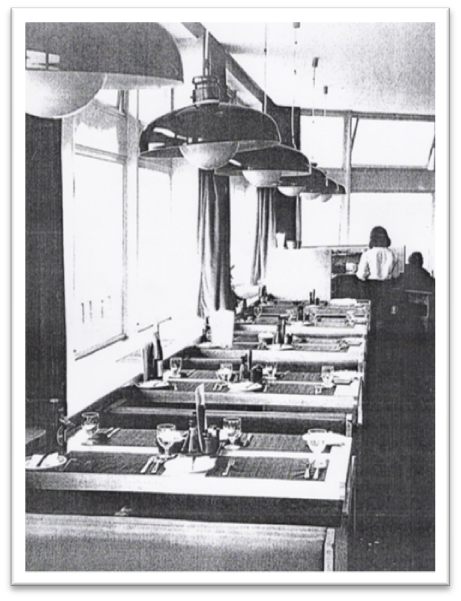 The building developed with structural engineer R.T. James consists of a steel frame for the tower with the cantilevered floors constructed in re-enforced concrete. The tower itself was originally designed to be 33 metres high but was reduced to 20 metres by local planners. The tower was designed to take an extra enclosed floor if it ever became possible to construct one. The lower storeys wrap around the hexagonal base of the tower and provide a large amount of flexible space with a minimum of structural columns. Tall windows formed a continuous band around the first floor and much of the ground floor. The 1964 plans, now much altered shows a lot of the internal partitioning was non-structural, allowing alterations to be undertaken with minimal disturbance. 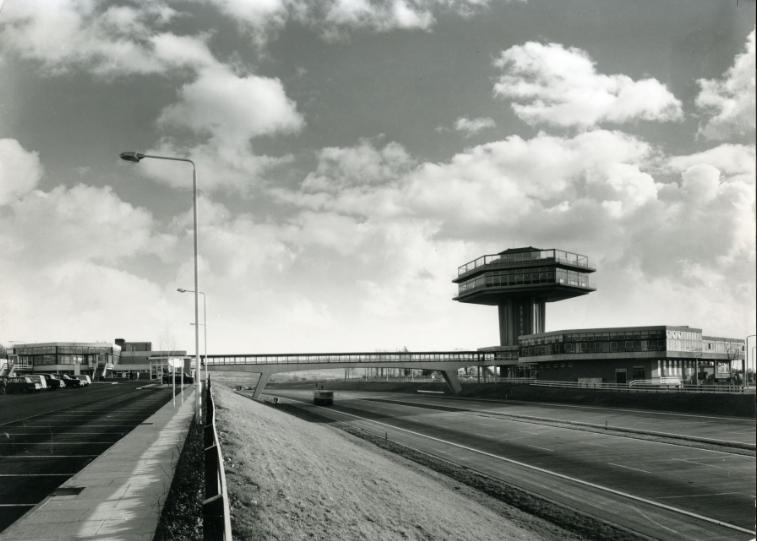 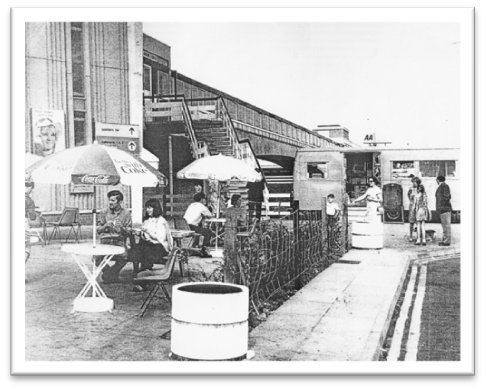 A generous flight of stairs lead to the entrance of the restaurant just at the north end of the covered walkway bridge. The restaurant sat alongside the truck drivers canteen. A pair of mirrored lifts within the central shaft of the tower gave access to the elevated restaurant and roof terrace. Across the bridge was a smaller cafeteria serving the travellers on southbound.

Unfortunately factors were against the tower restaurants’ survival and following the closure of the waiter service restaurant it was used as a staff room and truck drivers facility until its closure in 1989. Much more stringent fire regulations also contributed to its demise. To pack the restaurant with diners, the single fire escape within the tower shaft would not have been sufficient. The only alternative would have been to build an external escape outside the tower shaft, which was not financially feasible. 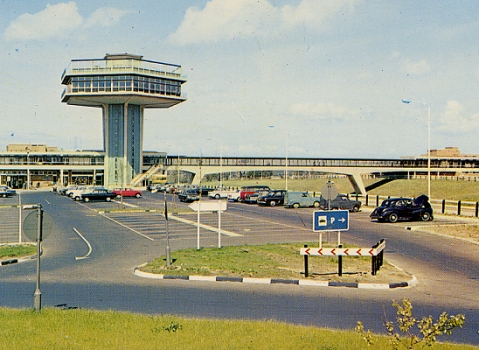 Much of the original fittings were removed and part of the tower was converted to offices, which incorporated the site administration, and later the northern regional office for Granada motorway services. When this was relocated to Trowell Services near Nottingham the tower remained empty. In 2001 the main administration office was refitted and used as a training / meeting room. The training room has been relocated to the ground floor and the tower itself mothballed. What future lies for the tower is uncertain but one thing is sure, it will remain as an outstanding landmark for travellers up and down the M6 for years to come.

The tower became a Grade 2 listed building on 15th of October 2012.

Forton Services on the M6 near Lancaster opened in 1965. It was operated by Top Rank Motor Inns, part of the giant media and entertainment combine, J Arthur Rank. It was Top Rank's second 'Motor Port' as they called them.

ed in Dec 1993 from a £89m management buy out of certain Rank Service stations headed by Michael Guthrie. Unfortunately for Pavilion the dream didn't last very long. All Pavilion sites were put up for sale in 1995 and was sold in April 1995 to Granada.

Granada entered the Motorway Business in 1965, seeing it as a possible extension to their leisure and hospitality interests, which included the ITV Contract for North West, TV production including Coronation Street, Cinemas, Bingo Halls, etc.Bought out Pavilion in 1995. For a period of time during the late 1990's the tower was used as the Northern Regional Office for Granada Motorway Services. Granada  merged with the Compass Group in 2000.

ada merged with The Compass Group to form Granada Compass plc Out of this merger all Granada Motorway Services were rebranded as Moto.. Granada Media Group became a subsidiary as Granada Media plc with Granada Compass Plc retaining 80% of the shares. The merger did not last long, and in February 2001 Compass and Granada once again went their separate ways, Compass taking all of Granada's food and hospitality business with it.

Compass agreed the sale of its railway station, airport and roadside catering division for £1.8bn. It is disposed of its Moto motorway services chain to a consortium led by Australia's Macquarie Bank, and offloaded its fast food brands - including Upper Crust and Caffè Ritazza - to a private equity group controlled  bySweden's Wallenberg family. 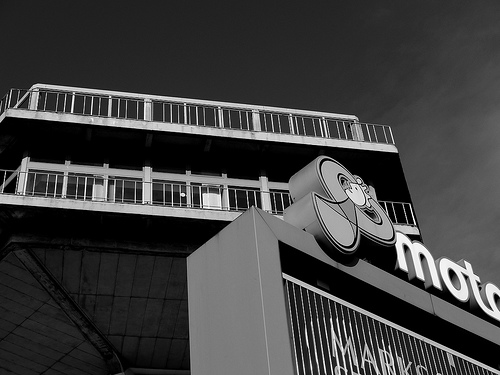